Building With Jenkins Inside an Ephemeral Docker Container

In this tutorial, you’ll learn:

Thinking inside the container means building inside one as well. Today I’d like to open up the box on how my team is currently combining Jenkins and Docker to serve Riot Engineering teams. In a related post, I promised I would discuss the actual build slave and Jenkins configuration directly. In some ways this is the main event—if you don’t have a Jenkins server ready to receive slaves, it’s a good idea to go back through and follow along with the previous posts.

Before I begin the tutorial proper, however, let’s talk about the approach and alternatives. There are many ways to use Docker containers as build slaves. Even narrowing the field to just using them on Jenkins still presents plenty of options. From my research and discovery, I feel that there are two major approaches you can take. Conceptually, I’ll refer to these as the “Docker execution” and “Docker ephemeral slave” models.

In the execution model, we architecturally assume the slave is a Docker host but we treat it as a physical machine. When a Jenkins job starts, it syncs/creates a working directory on the slave directly, leverages docker run and docker exec commands to spin up a container, and then mounts its local workspace inside. The container is a virtual scratchpad and isolated environment. It can have all the custom versions of tools and binaries that we need to compile the source code we’ve mounted into the container.

When the build job is complete, all the binaries and build artifacts it produced will be on the slave in the traditional Jenkins workspace. Jenkins can shut down the container safely and do any post-build cleanup as normal.

This model is best represented by the Cloudbees Custom Build Environment Plugin, which is open-source and maintained by the owners of the Jenkins source repository.

The ephemeral model aims to leverage the autonomous and isolated nature of Docker containers to scale a Jenkins build farm to meet any demand placed upon it. Instead of the traditional array of pre-allocated slaves or at-the-ready virtual machines, this model treats the entire container itself as a slave.

We spin up a container whenever there is a demand for a Jenkins executor, automatically configure Jenkins to accept this container as a new slave, execute the job within it, and finally shut down the container and de-allocate the slave. It’s certainly more complicated than the execution model.

This approach has several competing plugins, generally centered around how to maintain and build the Docker cloud you want to use. There’s plugins for Kubernetes, Mesos, and “pure” Docker approaches so far.

WHICH MODEL TO CHOOSE?

Both models represent valid approaches to solving the problem. At Riot, we were interested in getting away from allocating build boxes and “executors” to specific purposes, so the ephemeral model was attractive to us. We liked the idea of having a container represent the entire slave. So we went with the Docker Plugin to achieve our goals.

This is the longest tutorial I’ve written, so I’ve decided to link it here to save space (and to separate the conversation from the implementation). The tutorial takes about 30-45 minutes to complete, assuming you’ve followed the previous posts. You can check out the full tutorial here:

Alternatively if you want to get up and running as quickly as possible and skip the construction, you can pull down the complete tutorial and follow the README instructions here:

Operating this platform comes with its own set of distinct challenges. Here’s a short list of things to keep in mind that hopefully will save you time and effort:

OPERATING DOCKERHOSTS AT SCALE IS NOT “SIMPLE”

Monitoring disk space on your Docker hosts is essential. Do not let it run out. Be proactive.

CLEANING UP IMAGES AND CONTAINERS IS LIKE GARBAGE COLLECTION

Every time a new image is pushed to a Docker host, it leaves “dangling” unused layers behind. Cleaning these up has to become routine or disk space will be a problem.

Container slaves can sometimes halt or not clean up - paying attention to “exited” and “dead” containers is a necessary part of keeping a Docker host clean.

Initially, engineers had to request that their images be added to the Jenkins configuration. We soon noticed this process was an unnecessary impediment. In our experience, the average engineering team was changing their Dockerfile several times a week when in early development.

MONITORING THE BEAST IS ESSENTIAL

We’re still evolving how we monitor Jenkins and our Docker Swarm. The art of monitoring a Docker Cloud is in a constant state of evolution and takes a unique twist when that cloud is a Build Farm and not an Application Farm.

As with Harbormaster, discussing monitoring here would've made this article far longer. I'll be talking more about monitoring all of this in production in a future blog.

JENKINS AUDITING CAN BITE YOU

Once, we were woken in the middle of the night by a Jenkins server crash due to disk space running out. Turns out, it had 100,000 tiny log files of “Create/Destroy” build slave entries. Jenkins keeps an audit log of every build slave it creates and destroys; pay attention or you’ll end up suffering death by a thousand cuts.

There are more lessons I’m sure. I’ll be talking about how to handle some of these in future posts and/or presentations so please don’t hesitate to ask questions!

PRODUCTIONIZING YOUR SYSTEM AND OUR RESULTS

With the tutorial completed, you should have a fully functional Dockerized Jenkins sandbox. There is a mountain of potential in what you just created. There are a few things you need to do to “productionize” this.

Many of these things can be involved to set up, so please don’t hesitate to ask questions and provide pointers!

For us, this is not a “sandbox” or “playtime” setup. Our live environment changes only one component from what’s listed in this tutorial. Our production Dockerhost is actually a Docker Swarm app, backed by 6 Dockerhost machines. Here are some diagrams of how we have things set up right now (at the time of publication):

Here are some stats from our Production System: 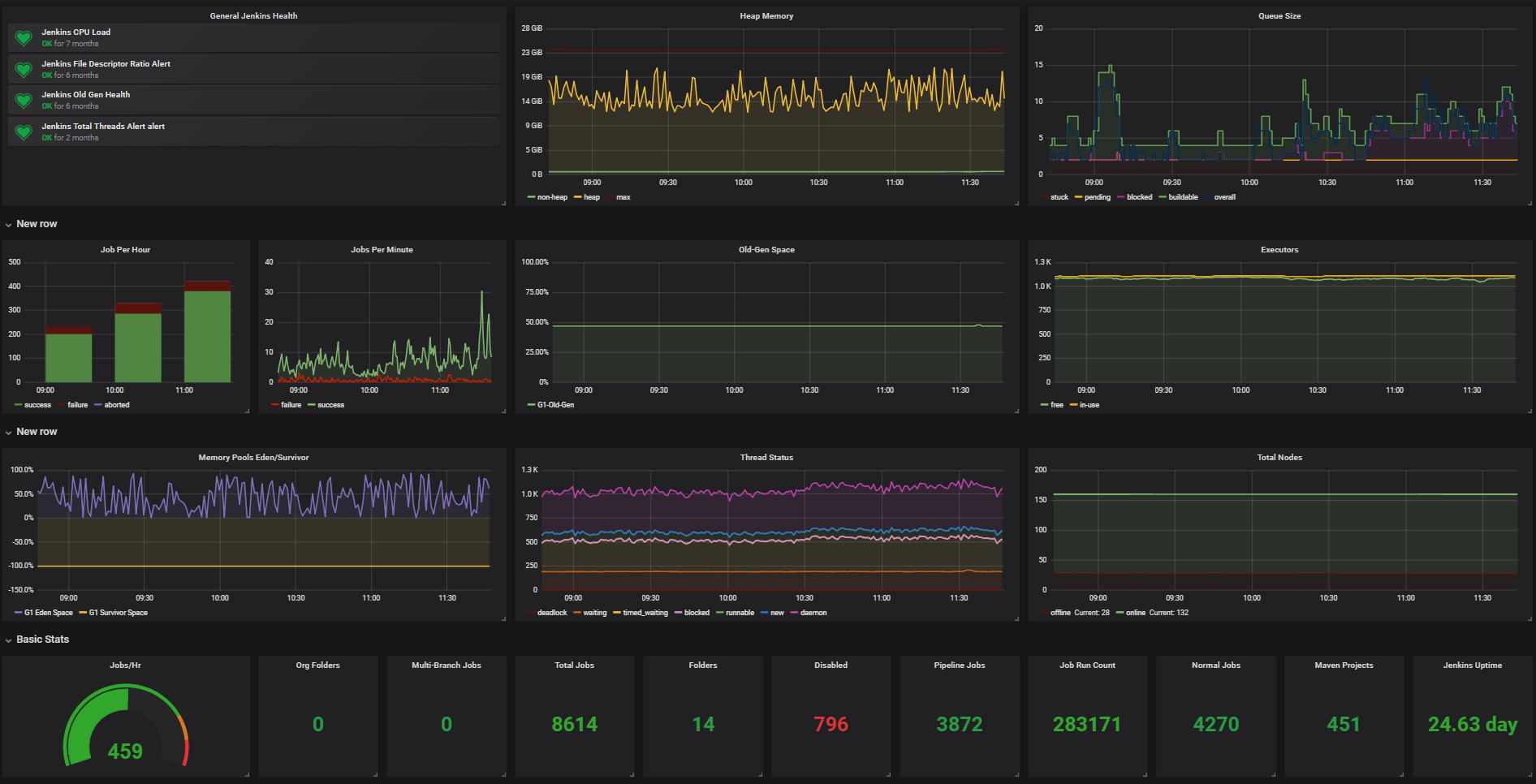 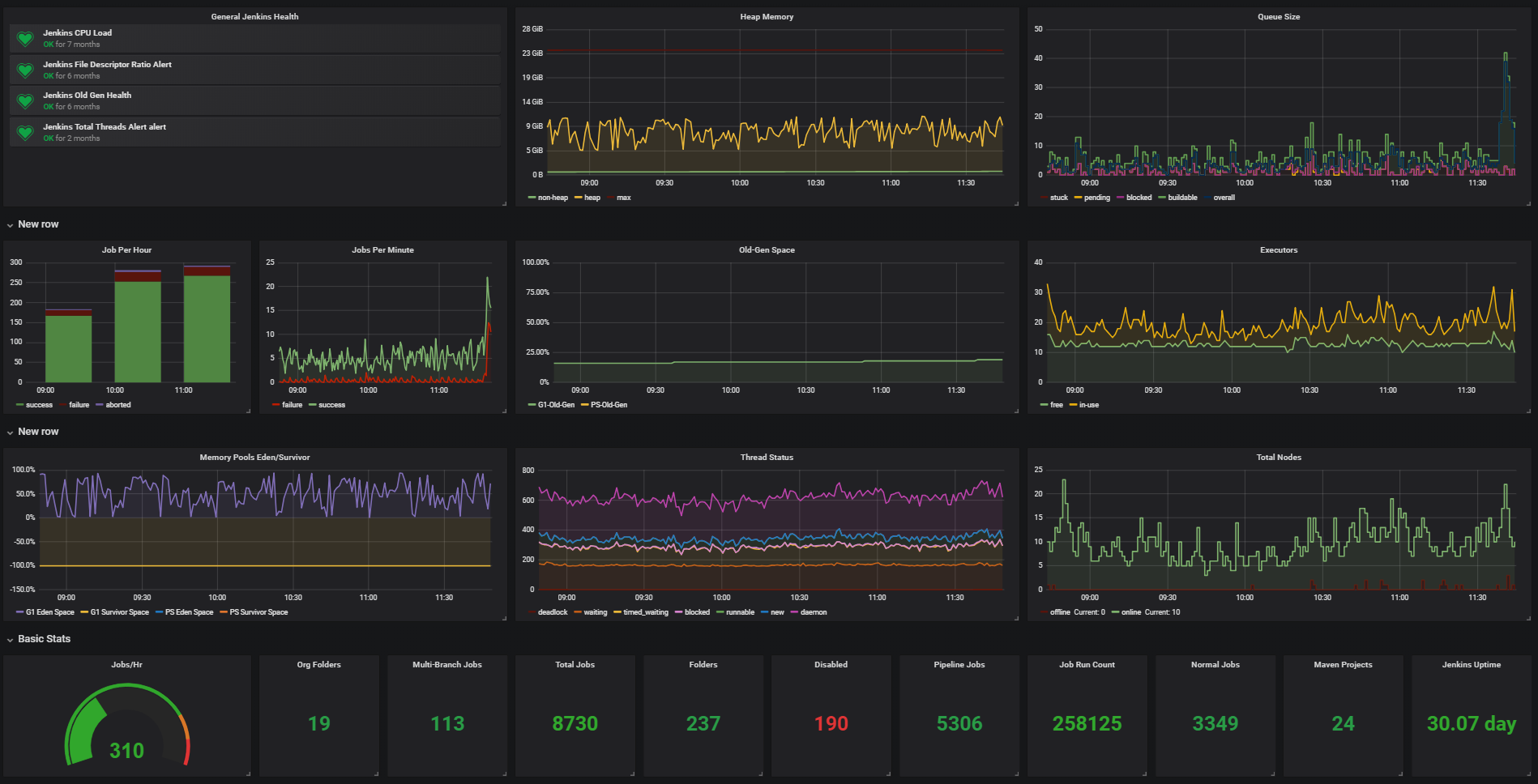 We deployed this system on a much earlier version of Docker (Docker 1.2) and Docker Plugin (.8) early in 2014. Stability at that time was definitely a concern. I feel confident in saying that the current setup (Docker 1.10 + Docker Plugin 0.15) is very stable for our needs. In the year or so we’ve been using this we grew from a handful of build jobs and some early adopting teams to a huge range of both. Thanks to the recent development on the Docker Plugin by Cloudbees, it’s now on version 1.1.4 and we’re in late stage testing of it now and intend to move to it as it no longer requries SSH connections and provisions significantly faster than it used to.

In fact, our Dockerized Jenkins platform now represents nearly 60% of all the build jobs we support on our entire Jenkins platform (7000 out of almost 12000). The only new jobs use on our Classic Jenkins setup are those that require Windows or OSX build environments (Typically for mobile or game engine development). This is because of the following things:

When I started this journey of blog writing in August of 2015, we already had a functional prototype. 30 months later we’ve received a tremendous amount of feedback and encouragement for putting this blog together and the results of the work define the future of our Continuous Delivery as a Service ecosystem.

By this point you should have a solid introduction to Docker basics, and know a bit about scaling Docker and securing it - all demonstrated through real-world use and application of Jenkins. On the flip side, you also should have a functional configuration of a full Jenkins test environment running against your local Docker for Mac or Windows Dockerhost, including the ability to create custom build slaves. It’s literally “Jenkins in a box.” I’ll dig deeper into this ecosystem in future posts, and describe the tools, APIs, and monitoring we’ve built.

I truly hope you’ve found this useful. The feedback we’ve received has been fantastic, and I love the enthusiasm of the community. As always you can comment below and I highly appreciate it!

All of the files are available on my public Github; everything here is built with nothing but Open Source magic! Do not hesitate to create issues there, provide pull requests, etc.